If there’s one thing about Star Citizen that has maintained its mystery over the years, it’s how exactly we’ll go about salvaging in the ‘Verse. Right now in the Persistent Universe, we get only a tiny taste of salvaging in tracking down the various wrecks strewn about asteroid fields and rings that require you to EVA to some ‘glowing’ crates that contain various personal weapons, ammo, credit-infusing bottles of whiskey, or just some inevitably frozen Big Benny’s noodles. Yet we’re still somewhat in the dark as to how we’ll be finding, extracting, and potentially refining all the space garbage in the universe.

We got a general idea of what may be involved with it in the Ship Repair and Maintenance post from last year. We also know that, in the Citizencon schedule, salvage is slated to be implemented right alongside repair in 3.2, meaning they’re probably tied together to some degree. The repair article goes in to detail describing how the player will be removing and replacing parts modularly, so it stands to reason that the same sort of action would be used to remove parts from ships destroyed and left as garbage. It even specifies that the raw materials used in rebuilding infrastructure and armor are a commodity that can be gained in various ways including scavenging. That makes it pretty clear that, in addition to searching for quality parts, you’ll be processing larger portions of ship structures for raw materials. 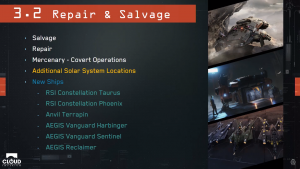 We’ve also had bits and pieces given to us over the past year such as the likelihood that there will be ‘debris fields’ similar to asteroid fields where players focusing on salvage can go and perform that task. This will probably mean, much like the importance of scanning to find resources in the mining profession, we’ll be scanning for areas dense with wrecked ships and that information in itself will be a commodity. This will further increase the importance of scanning/exploration ships like the Herald.

So there will definitely be debris fields you can salvage and there will just be some that will be seeded out there similar to asteroid fields – maybe a space battle from long ago and maybe there is some cool derelict stuff you can find and salvage and there will definitely be the opportunity to have space battles happen, if you come across it or you are there on the edges that you can recover a whole bunch of the salvage scrap and items then.

Collectively it seems at the moment, the necessary tools for salvage include the following:

We know that it is the case that all ships will be able to scan to some degree, but purpose-built scanning ships and variants will be able to find debris fields faster, further, and more effectively. It is also known that, there will have to be some sort of utility tool to carve larger parts from the rest of the damaged ships, so that will either need to be the handheld multi-tool or, a ship mounted device that can scale up the process, along with a tractor beam to pull everything in to the ship. Then potentially we’ll need the ability to refine raw materials into their core components on site, sort of like the Orion will do with mined materials, for efficient storage. Finally, storage will allow usable ship components to be kept along with any raw materials salvaged.

It’s a pretty straightforward list, and of course the Reclaimer has all of that along with launch pods for unmanned drones, so it of course makes sense that it’s the poster child for salvaging and most likely the pinnacle of the profession. But what ship will start you on the path to salvage glory? At the bottom I’d say something like the Reliant would be a great start. Using the remote turret for utility mount either as a cutting tool or tractor beam would definitely give you a leg up on those doing it in EVA. The Freelancer DUR would be a nice step up, supplying both the long range scanning and jumping along with a large amount of storage and the potential for utility mounts on the turret. Yet, I still have to wonder if we’ll get either a variant or a dedicated ship to provide a midpoint to the Reclaimer much like the Prospector did with the Orion. It would be a welcome addition and would go great with the 3.2 release.

With 2.6 around the corner and 3.0 on the horizon, I’m hoping that we get to find out more concrete information about the mechanics of salvage. I’m sure that if it is on par with the relatively deep mechanics of professions like mining or repair, it will be a fulfilling experience that some people could dedicate their characters to. This is most likely going to be something that comes from the mind of Tony Zurovec, though I wasn’t able to get my not-well-worded question to him in the last Subscriber Town Hall. I do expect that if the process is going to get any in-depth explanation, it will be in the near future.

Also, here’s a clever segue to a featured organization that focuses on salvaging: Wreck Raiders

So will you be scanning the stars for space trash? Do you think any current ships will get salvage variants? Can salvaging be an exciting enough profession to keep people interested?