Organization Spotlight: Those Guys with Ships

As part of the continuing evolution of INN, we’re taking a deeper look at Star Citizen Organizations, one of the most important structures within the community. To do this right, we’d like to get quotes and talk with real, active members so if you’d like your organization profiled, please contact me. We want to speak with as many as we can, regardless of size or mission. For our first Spotlight, I’d like to introduce the organization I belong to, Those Guys with Ships.

Introducing Those Guys with Ships

TGwS is a relaxed, casual, fun, and inclusive group as well as the producers of two well-known podcasts in the Star Citizen Community: Versecast & Those Guys with Ships

Where it all began

Those Guys with Ships was formed in the summer of 2014 with three friends, a handful of starships, and a whole lot of excitement about Star Citizen. Originally, the founders of TGwS just wanted to fill their ranks with a few friends who they could play the game with. Versecast was their strategy for successfully attracting additional members.

I wanted to find a group that was laid back where I could make some lasting friendships. The podcast gave me that feeling about TGwS after the first time I heard it. –FabledJunkyard //TGwS Admin

And it sure seems like the podcast is working. Since their origins, the group has grown steadily, and today Those Guys with Ships has 340 in-game members and thousands of fans beyond their organization. In spite of this impressive growth, the team has managed to maintain a casual, friendly atmosphere.

Part of this continuity is surely due to the active, friendly group of leaders who John and Gleep are quick to credit, for their role in growing the organization. The structure includes four sub-group leaders, three admins, and two moderators. They are:

This leadership cadre is always ready to help members and friends with anything they need to participate in Star Citizen or dozens of other favorite games. Their friendly, welcoming attitude is present in everyone I’ve interacted with in chat and on the forums. I’m convinced it has to do with the group’s origins being in Portland, Oregon. Bottom line: You’re not going to find any egos around here.

Those Guys with Ships is fundamentally an informal social club. Well beyond attracting a few friends to the game, today their goal is to create a place where anyone can join others who share their passion and desire to play Star Citizen. They don’t care how many ships you have, how good you can fly, or if you know what a fatal funnel is. It also doesn’t matter how much time you have to commit to playing the game or if you belong to other organizations.

At TGwS, there are only two requirements for membership:

Everyone is welcome to play with us in whatever ship they have, whenever they can, for as little or as long as they want. -TGwS

Getting to know the team

One thing I find particularly remarkable about Those Guys with Ships is there are members in chat every night at 6:00 PM Pacific hanging out, talking, and ready to play Star Citizen. Anyone can drop into our TeamSpeak Server and get to know the group. It’s kind of like walking into a friendly neighborhood bar. Eventually, someone will come by and say hello, but you can also just drop into one of the rooms and introduce yourself.

I first joined TGwS because of the causal and friendly people. I stayed because I feel like I have friends that I really enjoy having a good time with and are mature enough to respect each other. –Hardpoint //TGwS Admin

My entry into TGwS was through getting to know members of the team on Twitter, where they are very active using the hashtag #TGwS and #StarCitizen. After joking back and forth for two years online, I finally met members of the crew at CitizenCon 2016. I was instantly welcomed to hang out at their table and talk about the event and Star Citizen. Later on, after kicking back with Jimi Croker in LA, I realized these were the guys I wanted to fly with. 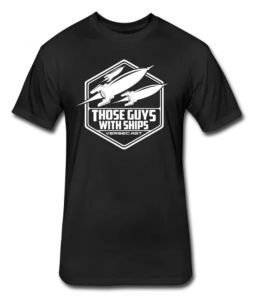 TGwS also has a remarkably active forum for a group this size where the leaders and guys like Cashew_Matrix, FabledJunkyard, and Cuba share their thoughts, tons of highly detailed information, and analysis on what’s going on at CIG and the game…All while welcoming the steady stream of newcomers.

TGwS also maintains an event calendar, team hangar, and an online store where you can grab a t-shirt. Membership is not required!

Well, that’s it for our Organization Spotlight on Those Guys with Ships. Like I said, INN’s goal is to spotlight as many Star Citizen Organizations as we possibly can. If you would like to talk about including yours, please don’t hesitate to contact us. Organizations: We want to know you!

See you in the ‘Verse.