Breaking and Entering, The Future of Boarding

We’re not far from being introduced to the first vehicle in Star Citizen designed exclusively for boarding enemy ships.  The results of the Art Contest are going to be announced this Friday during the Anniversary Live Stream, and that will also presumably be when we have our chance to check out the concept design of the Esperia Prowler. There hasn’t been a great deal of definitive information about the ship as of yet, but it was the $61 million stretch goal from 2014, and it is described as the following:

Esperia Prowler – Named after the UPE military designation, the Prowler is a modernized version of the infamous Tevarin boarding craft from the First Tevarin War. With the recent discovery of the lost Tevarin planet in Kabal System, Esperia’s engineers were given unmitigated access to examine the preserved ships found in several of the caches, before meticulously recreating the design choices. The Prowler’s effectiveness as a rapid personnel deployment vehicle was mainly due to its silence. The boarding was constructed using a variety of techniques to minimize its signatures and get close to unsuspecting vessels before quickly deploying their boarders via EVA. With the updated Prowler model, you will find the perfect fusion of two culture: the elegance and effectiveness of the Tevarin war machine combined with the reliability of modern UEE technology. (While lacking some of the upgrades of the modern version, vintage Tevarin-built Prowlers restored for modern spaceflight are prized by owners lucky enough to locate them.)

It sounds as though it will be a compelling design, apparently a stealth troop transport with some means to quickly deploy troops into EVA. If nothing else, it makes you curious as to how exactly boarding will work.  What will we need to do to take over a ship?

It seems the first step is to either find a ship that is unsuspecting and not moving, or to stop the ship by whatever interdiction means ultimately become available. Whether it’s EMP or other Electronic Warfare options, or just shooting the engines until they fall off, boarding will probably not be done Fast & Furious style while cruising through space. That seems to be the reason that the Prowler has a focus on being extremely stealthy, so that if you find a ship parked somewhere in the void, you can get close enough to it to EVA and start boarding before they can even consider escaping. 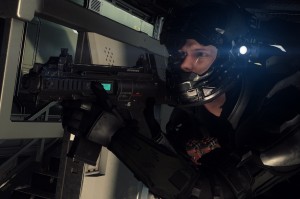 So what happens after you get your fully armed boarding party to the back door? Well then I think it’s a choice between a more subtle “hacking” effort, or the brash but effective “breach charge.” The former could lead you to a full on surprise of your target, meaning you could capture a ship without firing a shot, while the latter might be faster and require any skill in hacking, but would certainly alert the crew to prepare defenses. Then you have to potentially deal with more sealed doorways, automated defenses in larger ships, and of course an angry crew grabbing their guns. Though in a 10 for the Chairman from March of 2015, Chris Roberts said that most pilots would be relegated to light armor or flight suits in ships and medium and heavy armor may only be possible in large ships that can accommodate for that. So the advantage may still be yours if you’re breaching doorways in heavy or Titan armor.

There are still a lot of questions to be answered in the future about the boarding process though. Things like interdiction (closing in on and preventing target ships from escaping) will invariably be important in the boarding process. We’re also still a bit in the dark as to what will happen in the Persistent Universe when you take over another player’s ship. Questions like, will it be marked or traceable? Will you need special insurance to cover that sort of situation?  Will every large ship need an allotment of armed guards just to be safe? These things may not even be fully fleshed out in the minds of Chris and the rest of the team, but it will most likely be one of the more entertaining parts of the game, and one that sets it apart from other space sims.

So what do you think about the future of boarding in Star Citizen? Will the Prowler be your go-to ship, or will you be the one trying to keep your crew and cargo safe? Are ships like the Prowler going to be a necessity in piracy, or will big guns and a glorified net be all you need to make a fortune in the dark corners of the galaxy?