I’ve been playing FPS games on PC for a solid 20 years now, ever since I managed to get my mind blown by Duke Nukem 3D as a kid. It started a long love affair with all of the classics of the era, Quake, Half Life, Unreal Tournament, and so on up to this day when I rage at my totally-unaware team in Battlefield 1. I believe one of the reasons I excelled at Arena Commander early on was because its (now historical) twitchy flight mechanics lent themselves to my experience playing arena shooters. Now that Star Marine is seemingly on the verge of joining a long list of FPS titles, how does it stand up against the great assortment of quality multiplayer games we see today? 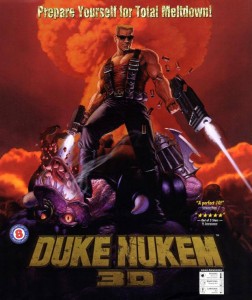 There are certainly a number of comparisons to be made, as Star Marine borrows plenty of mechanics from familiar games, but let’s first look at what is unique about it. The first item is something fairly unique to Star Citizen itself, that the first person view and the character model are tied together, rather than having the view host a special model (usually consisting of just arms and a gun). This is a setup that is familiar to players of Arma 3. It seems to create a much more intimate feel for the player and their weapon and also creates a scenario where the player sees the model for their body exactly where third parties would see it, so when you’re trying to hide or be behind cover, you know what is going to be visible.

The most unique part of Star Marine I believe is the dynamic shift between standard grounded movement and zero G movement. While it’s not used to great effect in the map we were shown in the livestream, I think it has the most potential to set the game mode apart from other modern games. If it is eventually implemented as it was supposed to in the early editions of Star Marine from last year, where gravity can be turned on and off, it will make the system even more enjoyable and dynamic. 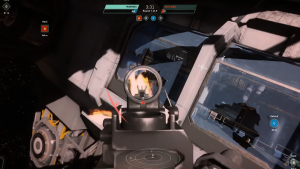 Star Marine has a great deal of gameplay that any multiplayer FPS player will be familiar with – capturing points by accessing a terminal, timed respawns, hip fire and aiming down sights/scope, sprinting, crouching, going prone, vaulting obstacles, persistent health (with bleed-out), grenades, ammo, and so on. If I had to compare it to current FPS games, the flow of the gameplay makes it seem a little more like Rainbow Six: Siege, but the resilience of the players and the control point game mode feel more in line with the small team game modes of Battlefield. Where it sits now would definitely invite a fairly wide spectrum of FPS players to try it out, though I think the criticism may be strong.

Star Marine doesn’t escape my criticism either. Aside from things that look to be bugs, like the delay in grenade throws and some clunky hit detection and/or aiming, there are some tweaks that would make it more appealing to an FPS fan like myself. First and foremost, the teammate indicators are terrible. It’s the same buggy augmented reality bubble that is present in the rest of Star Citizen and, if team damage is going to be enabled like in Arena Commander, there should be clear indicators for who is on your team. Especially when you’re already looking through an augmented reality with all of these HUD elements. 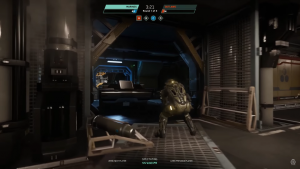 Speaking of HUD elements, the radar seems like a strange addition here. It doesn’t look like it’s too helpful, but it seems to me like the game could function well without it. If nothing else, it could use a change to maybe be a gadget that forces the player not to be armed temporarily or potentially give away the position of the player using it. (*On Reverse the Verse 2.14 there was a brief mention that radar wasn’t working as intended)

When looking at the game mode itself, control points are fine, but I’m a firm believer that it should be the case that the vast majority of the time, the match should end based on points rather than a time limit. Arena Commander had this problem for a while, but it was very much contingent on players actually getting kills to end the match. Here, as long as all of the control points are being controlled, the match should end when someone hits the point goal. Another game mode that would be enjoyable here would be one similar to Rainbow Six or CounterStrike where each player has only one life and wiping out the other team wins the round. (*This was discussed as a future possibility in Reverse the Verse today) That seems like it would work well with everything presented. Finally, I’d like to see more gadgets, weapon attachments, and other relatively small additions that can add variety to gameplay. Especially if they can promote tactical team play. 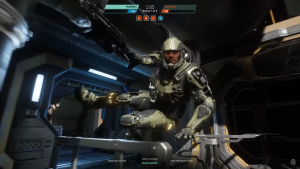 When I have full access to Star Marine and am allowed to comment on it, I’ll take a more detailed look at where it stands and where it can/should go. Where do you think Star Marine sits in the wide world of multiplayer FPS games? Will it make enough of a mark to bring in new players on its own? What would you like to have improved, removed, or changed?