As part of INN’s ongoing evolution, we’re taking a deeper look at Star Citizen Organizations, one of the most important structures within the community around CIG and the game. For our next Spotlight, I’m very pleased to introduce: Wreck Raiders.

Somewhere off the Crusader moon Yela

Khaloc dipped the starboard wingtip of his Sabre to get a better look at the derelict vessel drifting silently in the penumbra of a nearby, unnamed asteroid in the belt around Yela. As he slipped into a wide, sweeping arc around the smoldering hulk of twisted metal and debris he thumbed the mic switch on his controller.

“I’m on it. Set yourself up opposite me in a clockwise orbit around the mark at match velocity. I’ll contact the base.” Khaloc said.

“Aye wing.” Gray said, as he banked hard to the right. Crossing over the bow of the damaged vessel he rolled over to get a better look. “It’s an 89J for sure, skip.”

“Aye…Standby.” Khaloc replied as he switched over to the long range.

“Send it.” A voice crackled back from static.

Khaloc cleared his throat. “We’re on the signal CommandoPip transmitted in that long range data package. It’s a party boat, sliced open from stem to stern on the port side…” Khaloc strained to turn his head so he could get a better look without breaking formation. “…With what appears to be the back half of an Esperia Blade poking out of the smoking engine room. Looks like a raid gone bad. There’s another smoking, unidentified single-seater two klicks above us. No other vessels in the vicinity. No signs of life. Gray and I are on a one-kilometer, clockwise orbit around the wreck. Marking the destination coordinates…Time now.” 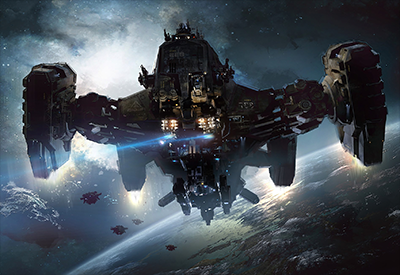 “Copy that.” The voice replied. “We’re sending up Bishop Bushido in the Hallowed Dirge to cut ‘er open and Stahlingrad in Big Booty to keep you all topped off with fuel and other necessities. Eric Crow will follow with a drop ship when the 89’ is secured. Maintain security while his extraction team cleans that mess up and then cover their exfiltration. Once they wrap up, atomize what’s left of the wreck and get yer asses back to base to enjoy some of the rare scotch whiskey that’s sure to be stored in her hold.”

“Aye, Aye Eric.” Khaloc replied as a Reclaimer and Starfarer dropped out of quantum drive in unison outside his canopy.

If I just described the opening scene of a mission you’d like to participate in, the Wreck Raiders just might be the right Star Citizen Organization for you. Singleness of purpose, maturity, and straight-up good times are what these guys are about. Organized much like a motorcycle club, they’ve now got 3 chapters including US West, US East, and Europe.

Although the organization avoids hierarchical structure, Wreck Raiders are lead by three founders and the President of the European Chapter:

As of the time of publishing they were about 50 members strong on the RSI website. Their Discord Channel is active every night with a lot of game time and funny conversation. If you’re lucky enough to get an invite, make sure you check out the BBC.

Wreck Raiders value mature gamers who respect one another but aren’t easily offended. Picture a bunch of bikers and you’ll understand the vibe. They believe that having fun and the demands of real life come first. The organization is structured to foster strong brotherhood and a sense of belonging with a flat management structure. They are governed by a democratic process.

In order to facilitate the fun, Wreck Raiders do hold scheduled play times which is part of the reason why they organize their chapters by time zone. However, members are not expected to commit to anything more than they could handle. Again, their goal is to have fun, remembering that real life comes first.

A friend of mine recruited me to the raiders. After flying a round or two of Vanduul swarm I could tell that this Org was right for me, feels like family. –Commandopip

Wreck Raiders are loosely organized into the three operational areas necessary to accomplish their primary mission of being the best scavenger and salvage outfit in the ‘Verse.

Simply put, their approach is to find wrecks first, secure them from outside exploitation, and haul in all that sweet, sweet cargo and valuables. Morally gray, Wreck Raiders are in it for the money, not care bears’ tears. That said, they have zero compunction about taking another pilot’s life if they think he or she might be interfering with the safety or profitability of one of their operations.

For me, the most thrilling activity in Star Citizen is to explore a derelict ship in space. For this reason, I wanted an organization with a focus on salvage. –Eric Crow, Founder

If you do think you’d like to get involved we’ve got great news: They are actively advertising many positions on Star Ship Crew Connector.

So that’s the Wreck Raiders! If you’d like your organization profiled on INN, please contact me. We want to speak with as many as we can, regardless of size or mission.