I have participated in many discussions about in-game communications since the presentation on Star Citizen Spectrum at CitizenCon this year. One thing that keeps coming up is whether or not there will be Superluminal Communication. While I find any conversation about Star Citizen captivating, I find this subject particularly interesting for three reasons:

This is, as I will explain, one of the few areas where I disagree with Chris Robert’s vision for the gameplay experience. I get what he’s going for in terms of mechanics, but I don’t believe it will work in any multiplayer scenario because nobody will resist the temptation to leverage third-party systems to gain competitive advantage.

In the beginning, there was silence. Well, mostly because my beginning with video games was pre-online gaming. Ever since we got online, for a long while, things have been pretty noisy.

In my experience, in the world of online PC gaming, the first significant breakthrough was voice comms. Instant side-voice (each side in PvP has their own channel) using some form of highly compressed, noisy VoIP, which had features and feel equivalent to a typical business meeting held online at the time. Just listen to the second half of the now famous ‘Leeroy Jenkins’ video, and you’ll get the picture. Just bunch of players shouting over each other to be heard in a virtual ‘room’ with no difference in volume or effects to simulate the acoustics of their environment. By the way, I’m sticking to PC Gaming in this exploration, but console is not much different.

As time went by things got a little more sophisticated, in my experience. Arma II, one of my all-time favorite games, introduced the notion of ‘channels’ so larger groups could scope and separate comms but this was completely dependent on voluntary compliance and it left a ‘global’ channel open to any individual player but it could be difficult to identify who was using it. This was an obvious vector for griefers and so we’d spend many sessions explaining to our teammates how to ‘mute that guy’ and then the wrong people would get muted and before you know it communications would fall apart.

Eventually, third party comms started to crowd into the space because they offered a much higher degree of functionality and control. Teamspeak is my favorite early example, but there are others. These systems allowed much better control and the ability to create password protected, ad-hoc channels and highly detailed permissions. Teamspeak, and others like it, also offered better sound quality and less problems with lag, but the overall experience was still just like VoIP. You felt like you were in the same room with your fellow players…And it was a room with zero reverb.

Finally, other third party developers began to tackle the issue of spatial acoustics. The earliest example I am familiar with is a mod called ACRE for Arma/Teamspeak. ACRE, which stand for Advanced Combat Radio Environment, actually deals with two separate but equally important audio considerations, direct comms and radio communications. The list of features is impressive, particularly for a free mod:

That second bullet under radios is a whopper. What it means, and I have experienced this, is you have to pick the right radio in game for a specific job. Trying to reach battalion command on a 343 squad com? Unlikely. Trying to reach air support on channel 3 when they are listening on channel 9? Not gonna work. Trying to reach your team on the wrong side of a mountain range? Expect difficulty. These are the conditions of radio communications in real life and the immersion is uncanny.

And that brings us up to the present time. What’s interesting is Star Citizen, like most science fiction universes, takes place at a time where technology is far more advanced than our own.

As I mentioned earlier, the second reason this topic is so interesting to me is the fact that it has been dealt with in every space-based sci-fi universe I’m aware of. The simple fact is, most of these stories take place over massive, interstellar distances, but also require the ability to communicate for the plot to make sense. Traditionally, the problem has been addressed in one of two ways, simply ignore it or create a pseudo-scientific mechanism for communication. In either case FTL comms always exists. 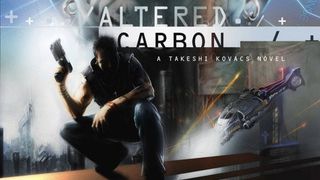 In Richard K. Morgan‘s Takeshi Kovacs novels colonies maintain contact with each other via hyperspatial needlecast, a technology which moves information “…so close to instantaneously that scientists are still arguing about the terminology”. Isaac Asimov solved the problem with his hyper-wave relay in the Foundation series. Larry Niven later used the same term in his Known Space series of novels and short stories, notably in the Ringworld and associated Fleet of Worlds series.

Back over to video games, Mass Effect explains instantaneous communication is possible using quantum-entanglement devices placed in the communication rooms of starships.

There are many more examples. The point is, this theme has been hashed and rehashed in science fiction and almost always comes out the same way: superluminal communication is necessary to tell a story on the scale of interstellar spacetime and human life. Any space-based sci-fi plot would be problematic without it.

No Superluminal Communication in Star Citizen

Chris Roberts has confirmed on multiple occasions, most recently, in March of 2016, that FTL communications will not be part of the Star Citizen Universe.

One thing is clear: Superluminal communication will be part of experience. The fact is, when it comes to PvP, the ability to communicate instantly is too much of an advantage to assume 3rd party systems will not be leveraged, a point Chris acknowledges. Frankly, I don’t think it’s an exaggeration to suggest everyone agrees that if it’s not part of the game functionality, players will just use the systems available outside the game.

What this means is CIG is willingly and knowingly abdicating an incredibly important part of the Star Citizen gameplay experience. As I asserted earlier, in-game communication is the biggest frontier for improving immersion, so this also means CIG has the chance to create the level of detailed accuracy now available in systems like ACRE, as part of the game, providing us with the immersion we all want so badly.

My hope is, at some point, CIG reverses course on this decision. What do you think? Do you believe in game communication is an important aspect of the overall experience? Do you agree that superluminal communication is widely accepted in sci-fi universe design?