The Turkey and Pumpkin Pie’s effect on my judgment are wearing off, and the dust has finally settled on the 2016 Anniversary Sale. It’s time to take a look at the sale qualitatively and then conduct a quantitative analysis of my Billing and Subscriptions page and assess the damage to my wallet. Before we get started, here are links to each of the sale day pages:

I realize all of these pages changed after they passed but I didn’t see anyplace else where you could easily click back to see the language used day by day or check out the videos. 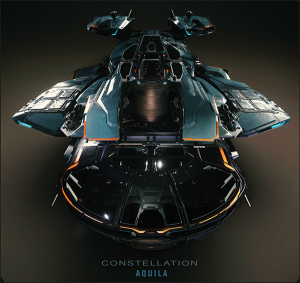 To get a sense of how the 2016 Anniversary sale was perceived by the community I plumbed the depths of various forums, including Reddit, RSI, organizations, as well as conversations on Discord.

In general, spirits were high all week with lots of excited chatter about what new ships everyone picked up. I was astonished at the level of thought some of my friends put into the future value of different packages and CCUs. I simply could not get my head around that level of detail.

Everyone I talked with was stoked to have the opportunity to pick up an Idris, Javelin, or 890 Jump, though there was some angst about the cost bump on Origin’s luxury party boat.

I’m the only person I know who isn’t drooling over the Prowler. To be honest, in my humble opinion, it is definitely one of the coolest and most unique designs we’ve seen so far. However, as I have no plans to be the pilot of a military drop ship, I know I just don’t need one.

Most people were pleasantly surprised by the unexpected chance to grab a rare Connie Phoenix. I also know a few more Carracks will be in the ‘verse after this week’s sale.

There were some areas of community concern, including a lot of questions about what the value of the four new variants is, beyond a nice new paint job. From my perspective, this line of questioning always loses sight of the fact that the point of these sales is to support the development of the game. Personally, I’m happy to do that in exchange for some sweet looking new variants. Of course, the Gladius Valiant, Sabre Comet, Hornet Wildfire, and Avenger Titan Renegade also include custom weapons load outs and other assorted goodies in the package as well.

By the Numbers (at approximately 6PM Eastern)

By the way, CIG needs to raise about $4.5 MM before the end of the year to match what was raised in 2015. Here’s to the hope that 2.6 comes out soon and generates a ton of excitement and new backers.

Before I get into all the gory details, I thought I would share that one of the joys of being part of INN is the opportunity it gives us to share our excitement and love of Star Citizen, and there’s no better way to share that excitement than with a shiny new ship giveaway. To that end, I’m planning to give away a lot of Star Citizen excitement over the next few months.

In fact, just under half of my ships investment in the Anniversary Sale is inventory for giveaways. If you’d like to get your hands on one or more of these babies, stay tuned!

The Day by Day Breakdown

On day one I purchased my first of two physical items, a Glossy Game Universe Poster. It will adorn the wall in my man-cave, directly to the left of my gaming rig for easy access.

On day two I picked up a Gladius to Gladius Valiant upgrade and an Origin 85x. The reason for the former is simple: I think it looks awesome and aesthetics are important to me. As for the 85x, my fleet needed a vessel for getting myself +1 around local space and down to planets in more style than the MPUV has to offer. And again, I think the 85x looks amazing.

On day three I picked up my second of two physical items, a new Star Citizen polo shirt, sized XL.

On day four things started getting serious when I snatched up matching Anniversary Edition Drake Heralds. One for a giveaway, and one for the INN fleet. Although I will be flying with TGwS, it’s still possible that INN will be an in-fiction news and information gathering organization. As such, I’ve slowly been gathering ships necessary for this role.

On day five I made a series of three upgrade purchases to round out my collection of fighters/smaller multi-crew vessels. All three were Reliant upgrades:

I’ve never been able to picture myself as a Cutlass owner until seeing the upcoming redesigned version. Frankly, I always thought the original Cutlass was ugly, too clumsy to be a good fighter, and too small to be a useful multi-crew ship. I’m looking forward to seeing how the redesign flies.

I grabbed the 325a because it was one of the first ships I purchased and then melted for something else. It was the first design I fell in love with the look of, and I honestly missed seeing it in my hangar. By the way CIG: We’re all looking forward to a time when we can expand our hangars and look at all our sweet ships at once again.

On days six through nine I picked up seven giveaways and two ships for my fleet. First up, the Avenger Titan Renegade. First, I was happy to grab this ship because I don’t have an Avenger yet and I like the limited edition nature of the design. However, once I noticed the Those Guys with Ships color scheme to the custom paint job, it was a slam dunk. Word has it the team at TGwS are planning an Avenger parade, and I didn’t want to be left out!

The Second ship I bought for myself on day nine was the Banu Merchantman. Interestingly, I have no plans to be a trader or merchant. However, at $250 the BMM seemed like the best deal of the entire sale and I couldn’t pass it up. If I don’t like how it looks in my hangar when it’s ready, I can always do a CCU for something else. That said, I’ve always felt it was an iconic looking vessel and I like it.

Today I wrapped up the sale with two more personal purchases and two more giveaways. On the personal end, I grabbed another Reliant Kore for the 325a upgrade purchased earlier in the week.

I also grabbed the Service Equipment and Crew Pod module for the Endeavor. I’ve been planning to use an Endeavor for a space-based headquarters since its concept sale, and I’m slowly picking up the pieces I want to customize it. This new module is in addition to the base Endeavor and a Hangar module.

What I didn’t get

So, at the beginning of the week, I told myself I would not buy a capital ship, and I managed to hold my ground in spite of the incredible new footage included in the UEE Big Guns videos. This was an ongoing internal battle all week. Although I don’t have ambitions to run a capital ship in-universe, my pride and desire to support the development almost got the best of me more than once throughout the week.

Ultimately, I ended up spending about as much on smaller ships, but wound up with so many opportunities to share the experience of Star Citizen with 9 new standalone giveaways and a starter package.

So how did you make out?

So that’s it. What did you get? How are you feeling today? Did your significant other determine what you spent on ships and move out of the house?

Let us know in the comments and don’t forget to check back often! We’re going to start giving away these ships before Christmas!